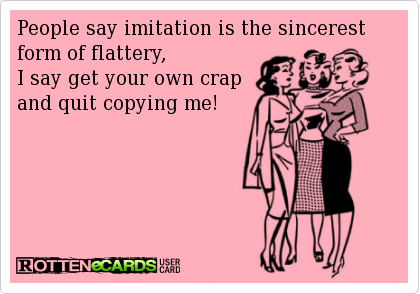 There’s a story of a women who made the most fabulous bread which she shared with everyone.
If someone was sick, sad, in need or just to say, “I’m thinking of you” she was there.
People would ask her for her recipe which she tried to give them but it was so familiar to her she baked mostly from memory.  Someone asked her, “Did you know you are famous for your bread, my friend”? Her face in total surprise said it all.
This was such a compliment and she didn’t really believe it but she thought about it.
One day my friend came to me and said a woman she had given her recipe to was passing her bread off as her own not giving my friend any credit.
She had heard this woman’s recipe was so much like hers people were commenting about it.
But the woman was not giving my friend any credit.
Was this woman wanting the love and attention my friend enjoyed using the same bread to attain it? Was my friend offended because this was her “thing”.  Was she afraid she would lose those who esteemed her bread so highly to someone else in her territory. Is there not room for both?
I think my friend was in danger of tainting her lovely giving personality and her famous bread by projecting what this one woman might be scheming to do.  Both seemed to lose interest after awhile.  My friend gave into her innate love of finding souls to cheer with her bread and the other woman?  I think she stole my chocolate chip cookie recipe.  Am I pissed.
Someone invented the wheel.  Do we care?  There will always be someone who had the idea first even if we think it was home grown in our heads.  The idea is given to whoever chooses to use it and we make it our own.  Can we copy outright and still pass it on as ours?  Of course.  No matter how closely something is copied, the copier leaves an indelible mark making it their own.
Should we give credit to all the ideas we take and create anew?  We can and some of us do.  A writer should mention his sources, fashion bloggers should give credit to the brands they wear, a musician may charge someone to cover their work and their name should be printed in the credits.  Plagiarism is embarrassing, most of us shy away from such things.  Copyrights protect our ideas and we can sue if someone violates them.  Louis Vuitton didn’t take too kindly to being copied but really, wasn’t all the publicity a good thing?  Hucksters still sell them on Canal Street “sort of” policed.  Who said, “There is no such thing as bad publicity”?
Charles Caleb Colton wrote, “Imitation is the sincerest form of flattery”.  But I think he met imitating not imitation in the sense of a cheap copy.  The knock-offs on Canal Street are imitation, period.
But I still think it boosted Vuitton’s sales.
But imitating someone says something.  Says something about both people.  The original’s creativity stands out, is vibrant, unusual, you can’t get it out of your head.  Why you imitate it is very personal. What puts light into someone else’s head may not do so in another.
An idea is air.  It has no substance until acted upon.  Ideas are collected from experience, the world around us, color, smell, memories.  No one owns them.  Unless as I stated above.
Do we give credit to every idea we rewrite, rework, redo, rebuild?  No.
I love the stories of women showing up at the same party in the same outfit.  Who owns what? Or “Who wore it Best”  It’s a laugh and a story to tell in a blog someday.  Who will be offended?  The one who doesn’t get credit for the idea or the imitator who made it work and didn’t even realize there was a need for “credit”.  We know, of course.
“Be yourself, everyone else is already taken”, wrote Oscar Wilde.
That doesn’t mean don’t run with someone else’s idea, who probably stole it from someone else.
Make it your own, imitate but don’t become an imitation.
Make it your own. 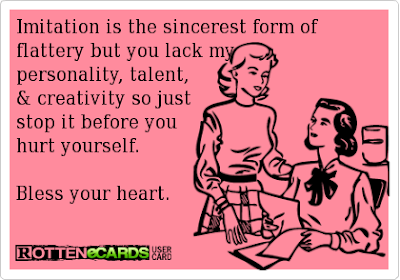 ** Disclaimer- to my dearest and closest friends (you know who you are, this is NOT about you) **